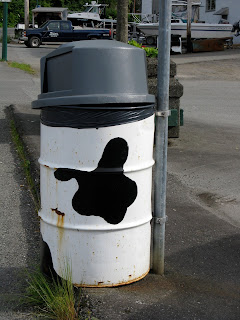 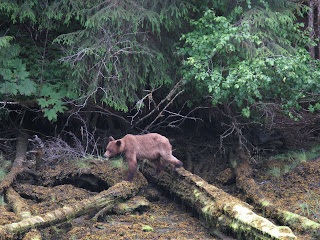 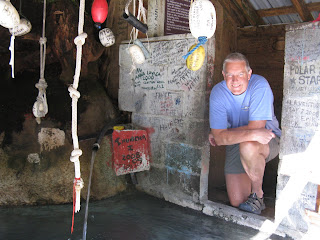 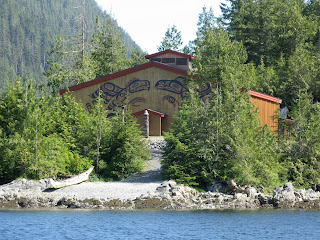 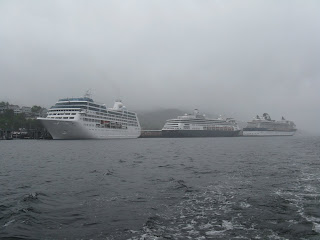 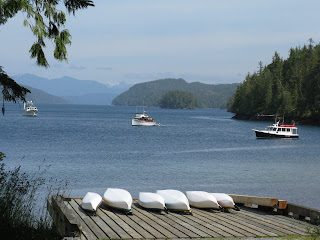 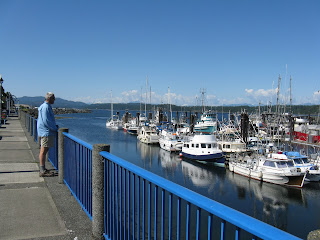 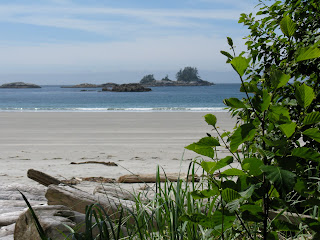 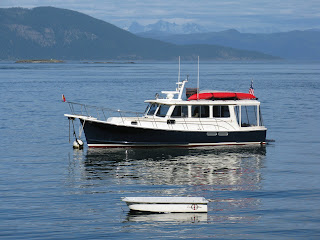 Greetings to faithful fans of the adventures of Bee Weems and also to those of you who are fans of Cathie and Peter and of Weems & Plath, manufacturer of fine marine and weather instruments, and nautical gifts.
This adventure begins on a gloriously sunny day when Pete and Cathie arrive in Anacortes, Washington on the afternoon of June 12th following an extremely early morning flight out of Baltimore. With help from our dear friends, Heidi Swartz (who volunteered to drive us the 1- 1/2 hour trip from Seattle up to Anacortes), and Chuck and Carol Worst (who loaned us shrimp and crab pots, rain gear, charts and many invaluable tips) we provisioned our boat and set out for Orcas Island on Sunday, the 13th. We spent two days visiting Peter's parents and enjoying our favorite destination spot, Doe Bay. (see photo)
On Tuesday after lunch we headed towards Bedwell Harbor to clear Canadian Customs and then due to the beautiful weather and the extended daylight we continued to Telegraph Harbor on Thetis Island where we put down the anchor for the evening.
On Wednesday morning Peter was up at first light which, unfortunately, at this time of year is at 4:30 am. He single handedly prepared for departure, raised the anchor and headed for Dodds Narrows so we could be there for slack tide to avoid the excitement of strong currents. (I stayed in bed until 6am. Be reasonable I'm on vacation!!) Excitement was avoided and we had a long but pleasant day travelling 90 miles to the town of Campbell River on Vancouver Island. Here we took on fuel and purchased fruit and veggies that we couldn't buy until after clearing Canadian Customs. We also enjoyed a lovely stroll and dinner of Dick's fish and chips on the dock. We met several cruisers at Discovery Harbor Marina where we spent the night who were familiar with our boat (quite flattering). (see photo)
The next morning after a quick stop for coffee at Timmy Horton's we departed at a more reasonable hour of 8:15am to catch the slack tide of Seymour Narrows. Another gorgeous day with no wind. Knowing that weather like this doesn't last forever we decided to push on, and we covered over 120 miles (our second longest day on record, I think!). We went straight through Johnstone Strait and all the way to the jumping off point for the crossing of Queen Charlotte Strait. I wanted to go to God's Pocket (because of the name), but instead we went to the Walker Group Islands to a very sheltered spot surrounded by old growth Hemlocks with no other boats for miles around, a lovely spot, another of God's pockets. (He has more than one, I'm sure.) We arrived by 8pm - a long day.
And then another early morning start on Friday morning to head across the Strait. How could we be so lucky? Another glorious day with a gentle swell that Bee Weems pushed through with no trouble. I understood the captain's desire to make good while the going was good, but these 12 hour days were not what I had in mind for vacation, so Peter promised that this day would be much shorter. He made good on the promise! We arrived at Pruth Bay on Calvert Island at 11am and put down the anchor. (see photo) After lunch we then readied the dinghy and rowed to the dock at the Haika Beach Institute and walked to the oceanside of the island to see an expansive white sand beach!!! WOW!! It was breathtaking. We spent a wonderful afternoon beachcombing and enjoying the sand in our toes. (see photo) This was a perfect day. And I forgot to mention that we saw our first spouting Humpback whale in Fitzhugh Sound today too!
Posted by Cathie at 7:57 PM 4 comments: