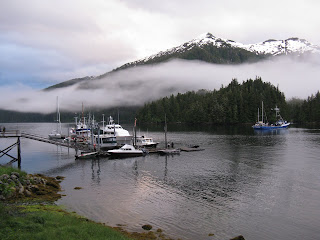 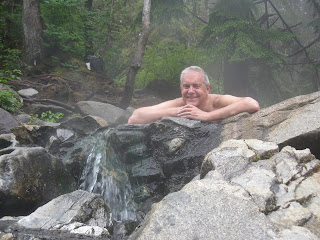 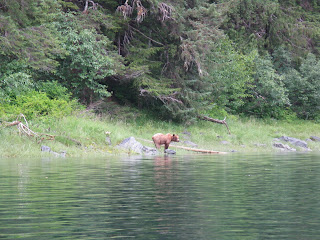 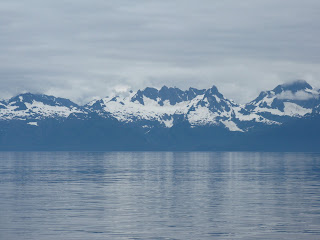 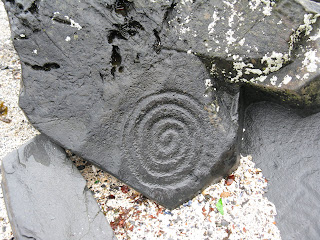 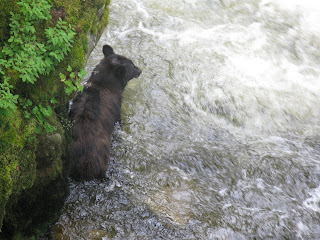 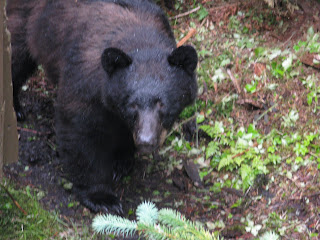 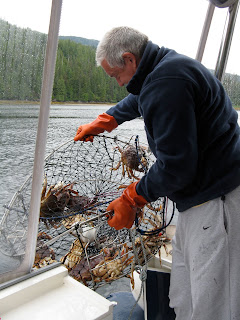 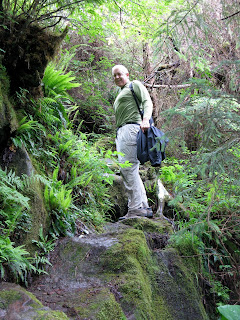 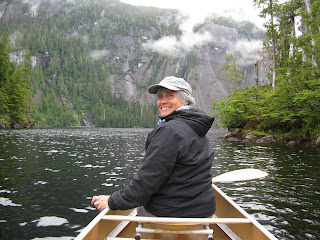 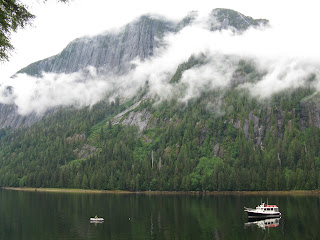 Hi all, I'm becoming a little more sophisticated as I work with this blog. I think I have successfully added links to google maps below each paragraph if you want to see exactly where we anchored/docked each night. Let me know if it doesn't work!!! Enjoy!

We left Ketchikan shortly after noon on Friday. It was a beautiful day with clouds and blue sky patches as we cruised south to Misty Fjords National Monument. (We couldn’t cruise this area on the way north because we had to clear U.S. Customs in Ketchikan first.) We traveled at 14 knots until we entered the Fjord area of Behm Canal and then slowed down to 7 knots to enjoy the scenery - magnificent snowcapped peaks, waterfalls galore, 4,000 foot high shear rock face walls.

The next morning we hiked to Punchbowl lake. Well, it was more like a scramble to the lake. The narrow trail was carved out of rocks and moss covered log steps and followed the path of the adjacent waterfall which made it a vertical climb! It was a beautiful hike, but arduous. There was a shelter at the top and a lovely carbon fiber canoe which we used to explore the lake. (see photos) The return trip was wet and slippery due to the rain that began to fall during our descent. We were soaked to the bone when we returned to the boat 3 hours later.

We cleaned up and then pulled anchor and headed to Walker Cove, another stunning setting along Behm Canal. On our way into the anchorage Peter placed both shrimp and crab pots in the pouring rain. Shrimp are found in depths of 200 to 400 feet. Crabs in 20 to 70 feet. We used the boat’s depth sounder to determine where to place the pots.

By morning the heavy rain had stopped. We pulled anchor early and investigated our pots. Six crabs, but only one large enough to keep, and about 40 shrimp. Not bad for our first attempt of the season. We continued north and west on Behm Canal towards Yes Bay. (‘Yes’ is the Indian Tlinkit word for “mussel’.) It was a lovely day, and we saw a pod of Orcas that we stopped to watch as we meandered along. We thought we would purchase fuel at the resort at Yes Bay, but when we approached we were told that they no longer provide fuel for cruisers. They only have fuel enough for their fishing fleet. Sign of the times, I imagine. We pulled into a cozy cove nearby that was much more intimate than the expansive bays we were in the two nights before. http://maps.google.com/maps?f=q&hl=en&geocode=&q=55.91011,-131.79871&ll=55.91011,-131.79871&ie=UTF8&z=12&om=1

The next day we decided to go back to Ketchikan just to top off our fuel and water tanks and pick up a few groceries. The Behm canal basically circumnavigates the island where Ketchikan is situated (Revillagigedo Island; I didn’t even know Ketchikan was on an island before this trip!). We went all the way around the island and went back into Ketchikan. We were dodged by about 10 seaplanes landing and taking off as we approached, and this time there were six cruise ships in town!! There’s a visitor dock near the Safeway store which was convenient and the fuel docks were immaculate, a pleasant change! We passed the Ketchikan International airport which is located on an adjacent island. The airport is also a ferry terminal and seaplane port.http://maps.google.com/maps?f=q&hl=en&geocode=&q=55.34954,-131.68189&ll=55.34954,-131.68189&ie=UTF8&z=12&om=1

Once were were well stocked we headed north into Tongass National Forest.

I should say here that our entire trip will take place in this 16.9 million acre National Forest which is the largest in the United States. It is over 100 years old and was designated a National Forest by President Theodore Roosevelt. This whole area is a “coastal temperate rainforest’ which means it receives more than 55 inches of precipitation annually. Only about 75,000 people live in the huge park area.

Again, we set our crab and shrimp pots before anchoring, and the next morning when we checked our pots we were greeted with the mother load!! Fourteen keeper crabs and a 5 gallon bucket full of shrimp! Yippee! Unfortunately, our crab permit only allows us three crab per day so we returned most of the crab to the sea. What could two of us do with 14 crab anyway? (And to my Maryland friends, I must remind you that these are Dungeness crabs! Big dudes!)(see photo) Pete spent much of the morning cleaning and cooking seafood! Seafood salad for dinner!!

This day was completely different from the pristine day before. Foggy, rainy and choppy seas. We decided to visit the nearby Anan Bear Observatory. The observatory is situated next to a river where salmon spawn. The black bear come to feast on the fish. After July 5th, visitors must call ahead to make reservations and pay a fee, but before that date there is no need to make reservations but you aren’t guaranteed that the bear will be there either. I did call ahead and found out that salmon were already in the river and so were the bear. We anchored in the bay and took the dingy to shore and walked the mile long boardwalk to the observatory. I was a bit nervous on the walk because I observed fresh bear scat along the path and bear claw marks in the wet dirt, but we arrived at the observation area unscathed. Soon after our arrival a bear sauntered up the boardwalk behind us. (The observation area is enclosed and safe from bear visitors, but it was a little disconcerting to see a bear show up so soon after our arrival.) We spent over an hour watching bear feed on the salmon. It was an amazing experience. (see photos).

We spent that rainy evening in Berg Bay off Blake Channel not far from Wrangell.

The next morning was rainy and foggy again. We arrived in the town of Wrangell in the early afternoon and decided to visit the very attractive Nolan Museum rather than walk the trails due to the rain. The museum was very informative, and I decided, despite the rain, that I really wanted to visit Petroglyph Beach which was mentioned in one of the museum displays. I ventured off on my own and had a really wonderful time exploring the beach which was a mile out of town. Examining the mysterious ancient rock art that is strewn along this remote beach really gave me pause. What is the message that our ancestors were trying to communicate? (see photo).
http://maps.google.com/maps?f=q&hl=en&geocode=&q=56.46456,-132.38158&ll=56.46456,-132.38158&ie=UTF8&z=12&om=1

The next day, was the first of July! Overcast and 50 degrees but no rain!! I’ve had to lower my expectations of what a good day is. A good day is a “no rain, no wind day”.

This day we headed up Wrangell Narrows to the town of Petersburg. I watched an eagle dive into the water, and then as he lifted his wings to fly he realized he couldn’t get airborne due to the weight of the fish in his talons. So he used his wings as arms to do the butterfly stroke all the way across the channel to the rocks where he climbed with his big fish intact. I have never seen anything like that before!

Peterburg is a delightful town. More attractive than Wrangell. Petersburg is influenced by its heritage of Native American mixed with Norwegian blood. It’s very visible that the locals are proud of their community. They have a fish processing plant in the center of town that employs many of the citizens. Cruise ships don’t come here so there aren’t an over abundance of trashy tourist shops. There IS a fabulous book store which we supported financially before departing, and we ate a wonderful seafood meal at the local seafood shop/cafe which also had free internet! http://maps.google.com/maps?f=q&hl=en&geocode=&q=56.81373,-132.96107&ll=56.81373,-132.96107&ie=UTF8&z=12&om=1

We departed at 6am on the morning of July 2nd because we were crossing Frederick Sound and Chatham Strait - two large bodies of water, a long day. Pete had checked the weather the night before and determined that this day was going to be the least windy for several days to come. Shortly after leaving Petersburg we had our first glimpse of “bergie bits”, small icebergs floating down the Sound from one of the nearby glaciers. We cruised slowly all day long. We were amazed at the sea conditions. Not a breath of wind. No waves of any kind. It was almost spooky - all day long. (see photo).We did see several humpback whales as we traveled but didn’t get close enough to take any pictures.

We pulled into Red Bluff Bay on Baronoff Island at 2pm. It was a beautiful anchorage, close to a massive waterfall cascading from snowcapped peaks above. As we were preparing to anchor I saw a brown bear on the beach in front of the boat. I couldn’t believe it! I had to laugh because I have been scanning hundreds of miles of coastline with my binoculars looking for signs of bears and have never seen any (with the exception of the bear reserves). And here we park ourselves right in front of one with no fuss no muss. We had the opportunity to observe this bear for over an hour as he foraged for berries and grass! What a treat! (see photo) This bear was an Alaskan Brown Bear which is essentially the same as a Grizzly bear although my guide book says the Brown bears are larger than the Grizzlies. In any case, both the Grizzly and the Brown bears have humps whereas the Black bears which we saw at the Anan Observatory do not have humps and are much smaller, and I have been told, are less aggressive too. http://maps.google.com/maps?f=q&hl=en&geocode=&q=56.87162,-134.7845&ll=56.87162,-134.7845&ie=UTF8&z=12&om=1

We had a short trip up to Warm Springs the following morning. Here is our second visit to a natural hot spring. This one is located adjacent to a fast moving river. There is an intimate village of summer homes connected by boardwalk and a dock that visiting boats can tie to. We arrived mid morning and found the dock was already full with commercial fishing boats waiting for the “opening day” of salmon fishing which happened to be at 5am on the 4th of July. We were able to tie to the dock in a tight space but by the end of the day most of the fishing boats had left. We walked the 1/2 mile up the board walk to the natural hot springs in the rain, changed into our bathing suit in the woods and waded into the sulfur smelling pool. Delightfully warm on a cold July day. (see photo) We became friendly with another couple who had chartered a boat with a captain for 10 days. They invited us for cocktails aboard their boat that evening. A pleasant change from our normal routine.

Independance Day was spent continuing along the coastline of Baronoff Island. We anchored in a small bay called Baby Bear Cove. No bears when we arrived just a dear nibbling on the shore grasses. We know there are snowcapped peaks along this coastline but today they weren’t visible - low visibility - clouds, rain. A quiet holiday for us today. I wore red, white and blue and ate blueberries and red salmon berries (I picked at Warm Springs) with vanilla yogart for breakfast.

We arrived in Sitka on the 5th, the official national holiday. We found out that for the first time in the history of Sitka the city was unable to set off fireworks because of the rain and fog. The fireworks are normally set off at 11:30 at night because that's when it gets dark here.

I am in a coffee house with free internet service enjoying the opportunity to catch up on email and my blog. We hear the weather will improve tomorrow, so we are staying two days in Sitka and hope to be off again when we can see a little better. Not much to see when its this misty and foggy!