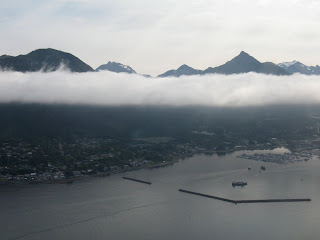 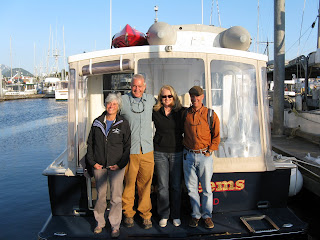 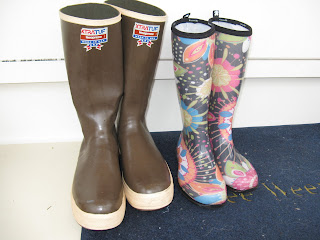 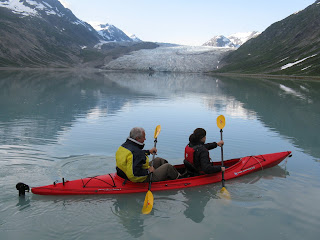 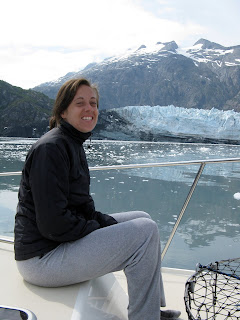 It’s been wonderful to spend our last week in Alaska with, our daughter, Shea. We spent the first two days of her visit showing her the highlights of Glacier Bay. (see photos) Fortunately, the weather cooperated so she was able to see the mountains and glaciers in all their glory and plenty of wildlife too, including numerous bears and whales. The biggest treat for me was to have the opportunity to listen to a group of Humpback whales while feeding in Icy Strait. They communicated with each other in an eery “other worldly” language. Shea said it reminded her of the sounds dinosaurs made in the Jurassic Park movies. I agree. The whales used deep hollow tones, loud rapid clicks, and long high tones. What were they saying to each other? Very captivating.

When we left Glacier Bay we stopped in Hoonah, the location the Tlingit retreated to when Glacier Bay advanced into their village during what was called the “mini Ice Age” in the mid 1700s. And then we visited Tenakee Springs so Shea could have a taste of both a native village and a village created by loggers, cannery workers, fishermen and now summer vacationers who are attracted to the hot springs and the rural lifestyle. Two very different villages.

As we approach Sitka, our final destination before turning the helm over to Steve and Gwen Zimmerman, who will bring Bee Weems back to Anacortes, Washington and put her on a truck to transport back to Annapolis, I am finding it hard to believe that our seven week Alaskan adventure is coming to a close.

One thing that’s certain, boat ownership in Alaska is for the purpose of harvesting the bounty of the sea. Folks on boats are either commercial fisherman, charter fishermen or sport fisherman. Even the pleasure boaters spend much of their cruising time fishing, crabbing and shrimping. Peter and I felt a little out of sorts because we spent very little time fishing. First, we don’t have all the correct gear/equipment on board for fishing. Second, even if we had the right gear Bee Weems doesn’t go slow enough to troll which is necessary for salmon fishing. Third, even if we were able to catch fish we don’t have the freezer space to store it once we catch it. We were, however, the benefactors of several gifts of salmon, halibut and shrimp from boating friends along the way.

Another observation has to do with the footwear of the Alaskan community. This may seem like a minor observation, but its one that was striking to me. I don’t think I’d be exaggerating very much if I said that 90% of all Alaskans wear XTRA-TUF boots as their footwear of choice year around, 24/7. These brown neoprene boots are worn by both professional fishermen and yachtsmen alike. I also saw school age children wearing them along the paved sidewalks of Sitka, and I saw them worn by young people (men and women) heading to the local bar on Friday evening date night in Petersburg - sometimes pant-legs were tucked into boots, sometimes not. It is apparent that XTRA-TUF boots are a fashion statement in Alaska, similar to UGG’s in the lower 48. Rubber or neoprene boots are definitely a necessity up here, but how did this particular brand get such a big corner of the market? There are other styles and brands available. I know because I purchased mine in a women’s clothing boutique on Main Street in Annapolis before embarking on the trip. You can see how well they blended in with the basic brown boots in Alaska!! (See photo)

Finally, I will conclude with a comment about the weather. After-all, weather is universally the number one most popular topic of conversation worldwide, and it played an important role in our journey. Peter and I knew that Southeast Alaska was a designated ‘temperate rain forest’, (definition: more than 55 inches of annual precipitation with more than 10% occurring in the summer. Cool, frequently overcast summers with midsummer temperatures less than 61 degrees fahrenheit). And we had heard many stories from other cruisers about “the summer it rained every day while we were there” or “the summer it never got above 60 degrees.” We were hopeful that it might be different for us. We were told that many cruisers always went north in May and enjoyed spectacular weather, so we knew that the weather was nice sometimes. I’m not a meteorologist, but it was recently explained to me that the reason the weather is good in May is that the air temperature at that time of the year is still similar to the water temperature off shore, so clouds are not forming over the ocean that then come inland and dump rain (or fog) on the coastal mountain ranges as happens in the summer months when the sun is warmer and contrasts with the cold water temperatures. Now we understand the phenomena. Next time, if we have the flexibility, we will come to Alaska in May.

Don’t misunderstand, we had a fabulous time. We were amazed by the opportunities to observe the spectacular wildlife all around us no matter what the weather, and we were thrilled with the magnificent scenery when it was visible. We met some great people along the way and learned a lot about the geography, history and culture of this wonderful state. Before this adventure I knew very little about Alaska. The phrase, “Southeast Alaska” was a designation that I didn’t quite understand, but now I am intimately familiar with many of the nooks and crannies. I know where to look for grizzlies and black bears, where the salmon run in June and July, where the tide currents can be dangerous, and where the best wi-fi coffee shops are located.

This adventure has been a dream that Peter has carried with him for more than 20 years and it has finally come to fruition. We hope that this story inspires you to go forth and follow your dreams whatever they may be.

Postlude: Our last day in Sitka was perfect! The sky was blue, the sun warm! We were able to see the mountains that are the backdrop to this lovely little town. Plus we were able to say our final farewells to our new friends on the two Nordhavn yachts, Sea Star and Outward Bound, who arrived at the Sitka Marina shortly after us and to Dave from Grocery Boy, the friend who allowed us to tie up to his boat in Auke Bay near Juneau several weeks ago. We also enjoyed a wonderful dinner at the delightful gourmet mediterranean restaurant in town, Ludwig’s, with the Zimmermans to share stories and advice as they embark on their month long journey southward aboard Bee Weems. Shea, Pete and I fly to Seattle today to spend time with family for two days. Then Pete and I will fly home to Maryland and Shea will fly to Hawaii to visit a friend for two weeks!

Stay tuned for further adventures of the Bee Weems back again on the eastern seaboard of the United States!!